The city of Barcelona is the second largest city in Spain, and the capital of Catalonia, with a population of 1,7 million inhabitants and 3 million in the metropolitan area. Its cultural richness, vibrant life, and splendid location has made it one of the most visited cities in the world, with over 4 million visitors per year.

Over two thousand years old, there is not just one Barcelona, but several. The old city (Ciutat Vella) offers the visitor a wide range of routes to follow and reconstruct the history of Barcelona by starting at the Roman walls, moving to the medieval streets of the Gothic Quarter and going to the popular promenade know as La Rambla. The city expansion (Eixample), formed from 1860 to 1930, bears witness to the wealth brought about by the economic growth of the period. Barcelona is best known for its architectural treasures, featuring many unique buildings from the “Modernist” period (late 19th-early 20th centuries), seven of which have declared World Heritage Sites by UNESCO. Furthermore, in the last two decades, Barcelona has been an experimentation ground for the most innovative architectural concepts.

Barcelona is also famous for its cultural tradition. The city has over twenty museums, covering all aspects of art and culture. The best known are the National Museum of Art of Catalonia , superbly located near the Miró Foundation, the Picasso Museum, and the Tàpies Foundation. The CosmoCaixa science museum is also well worth a visit.

Most classical musical events take place in three large venues: the Palau de la Música Catalana, a real modernist gem, the Auditori, and the Gran Teatre del Liceu in Ramblas, which is a leading opera house, reconstructed after its burning in 1994. For less stuffy venues and outings, have a look, for instance, here.

CLIMATE
Barcelona enjoys a Mediterranean climate, in which extreme temperatures are rare. The average temperature for the month of September is 26C.
LOCAL ATTRACTIONS
La Rambla and the city center
Right in the center of the city, the street called La Rambla is the perfect spot to go for a stroll. It is a favourite tourist attraction, with flower sellers, street performers, the beautiful market of La Boqueria, the Liceu Opera house, among many other attractions. From La Rambla, you can visit the Barri Gotic and El Raval.

The Barri Gotic is the old city of Barcelona which was built on and around the old Roman town of Barcino. This part of the city is an attraction in itself with many churches, plazas, markets and museums. You can see parts of the old Roman walls and, underground, the Museu d’Història de la Ciutat, where you can walk through the remains of Roman houses and streets of Barcino. There are several metro stops on both sides of the Gothic Quarter.

Park Guell
A magical park with amazing buildings, sculptures and tile work designed by Gaudi. You will also find Gaudi’s old home in Park Guell which is now open to the public as a small museum. Reservation in advance is required.

Metro: Lesseps (Green Line, L3). On leaving the metro follow the street signposts for the park.

La Pedrera
Another one of Antoni Gaudi’s creations once again hits the top 5 most visited attractions in Barcelona. This building used to be called Casa Mila but nowadays it’s more commonly known as La Pedrera (meaning The Quarry). Gaudi was instrumental in completing this building and his characteristic wavy brick work and colourful tiles are also evident on this masterpiece.
Address: Street Provenca, 261-265, Barcelona
Metro: Diagonal (Green Line, L3) and (Blue Line, L5)

The Beach
C’mon! It’s summer, go and have a swim! 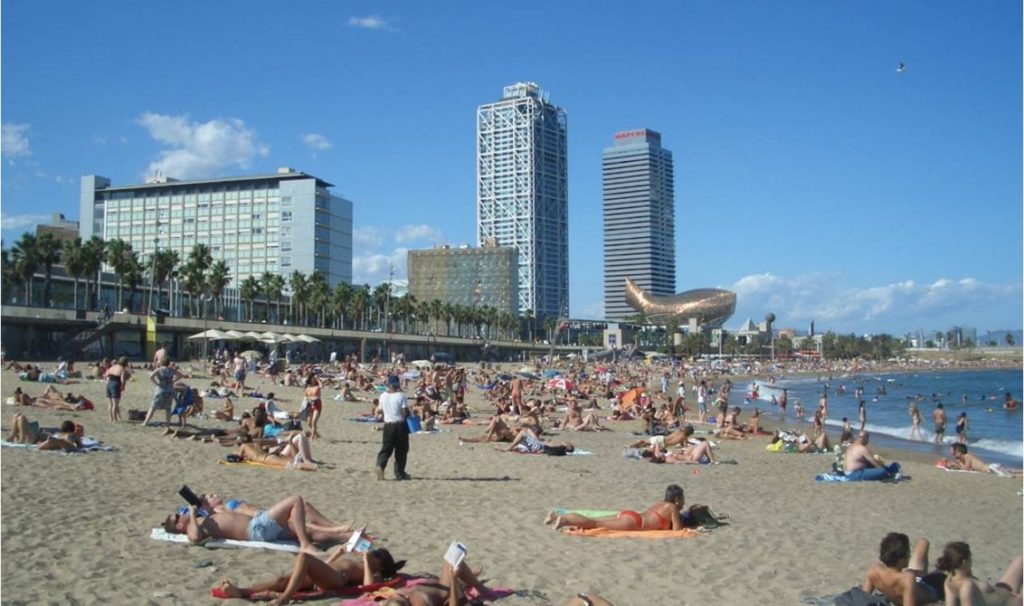 SECURITY TIPS
Barcelona is a generally safe city, visited every year by millions of tourists. However, pick pocketing and bag snatching are one of the most common problems that visitors encounter while in the city. Pick pocketing and bag snatching is most common on La Rambla area, at rail stations, on the beaches, and in the metro (subway).
In order to avoid them it is sufficient to observe the following common sense precautions:

Keep always an eye on your belongings, never leave them unattended.

Pay special attention in crowds, restaurants, and public transport, where thieves are most active. In crowded areas, carry your backpack on your chest rather than on your back, and your wallet on your front rather than your back pocket.

Do not carry your passport with you unless necessary. A photocopy will do for most situations in which you must prove your identity.

INSURANCES
The organizers do not accept responsibility for individual medical, travel or personal insurance. Participants are strongly advised to take out their own insurance policies.
CURRENCY AND BANKING FACILITES
The Euro (€) is the currency of the European Union. You can change money at the city’s banks as well as at the exchange booths located in the city center and at tourist sites. Cash machines, which accept most bankcards, are located at the airport and throughout the city of Barcelona. Banks open from Monday to Friday, 08.30 h. to 14.00h.
SHOPPING HOURS
Shops in Barcelona open their doors between 9.00 and 10.00 in the morning, and some still close for lunch at 1.30 or 2.00. The latter open again in the afternoon between 4.00 and 5.00 and remain open until 8.00 or 8.30 in the evening.

Nevertheless, it should be noted that many shopping centres and larger establishments do not close at midday. Many shops and all department stores and shopping centres open Saturday afternoons, while all shops close Sundays, except for a few dates when they are allowed to open.

FOOD AND DRINKS
Lunchtime (comida) is basically from 2pm to 4pm and is the main meal of the day. No sane local would contemplate chomping into dinner (cena) before 9pm. That said, although restaurants tend to stay open until 1am or so, most kitchens are closed by 11.30pm.
ELECTRICITY SUPPLY
Electricity is supplied at 220 V – 50 Hz
Menu